Working page for Amahi DLNA, the Amahi port of MiniDLNA. It makes your Amahi HDA the best media server for all your clients.

What is DLNA? Digital Living Network Alliance (DLNA) is a non-profit organization responsible for defining interoperability guidelines to enable sharing of digital media between multimedia devices. The guidelines are built upon existing public standards.

The configuration file (a.k.a ".conf") has some options that can be configured. Changes can be made to the file as the "root" user via a "Terminal Session" window using the vi or nano editors.

In cases where the DNLA Players cannot support a video format, utility software on a client workstation can be used for "transcoding". The final transcoded file(s) then can be uploaded to an Amahi media directory.

In the case of Fedora the following could apply:

DLNA Not Running After Boot-Up

This problem may occur on "some" systems after Amahi 7 starts ( see Amahi Dashboard: Setup > Settings > Servers).

If you have services which fail if they are started before the network is up, you have to use NetworkManager-wait-online.service in addition to the NetworkManager service. This is however hardly ever necessary since most network daemons start up fine, even if the network has not been configured yet.

There is no list of Amahi Certified DLNA Players because most (99.999%) of clients will work. The client has to support the format of the file that the server is streaming. Not all clients support all the formats. Typically DivX format are widely supported, but newer formats like Matroska may not be supported by some clients.

Below you will find a list of some client devices/applications. Feel free to add your client and what features it supports.

At the moment, with a WD TV Live player, we can stream from .avi files to full 1080p content from this server.

Notes on working state with PS3.

Playing of mp3-files has been no problem - worked fine.

Notes on working state with Xbox 360:

The TV will play all media (pictures, music, movies) over WLAN/LAN, in TVs like the Samsung with Media@ features, no problem.

On Windows 7 the Windows Media Player 11 shows successfully the Amahi-Server. On Windows XP this doesn't work.

The VLC Media Player by VideoLAN will connect to a DLNA server on various operating system platforms. DLNA integration has substantially improved since VLC version 2.

On Linux and Windows releases DLNA can be used as follows: 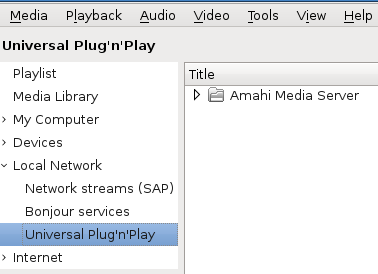 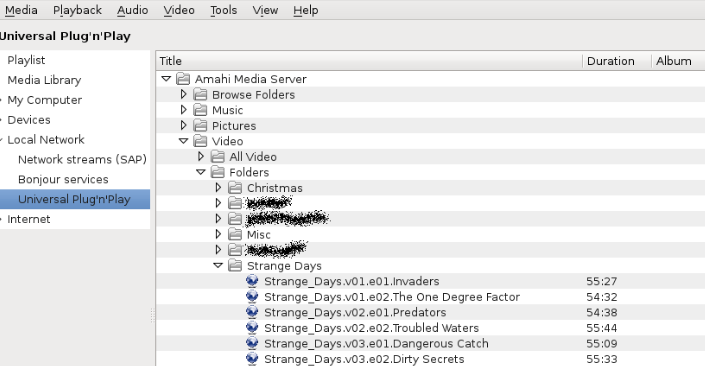 The client which is available at http://4u2stream.4u2sites.com works under windows xp.

Music, video, and pictures all work perfectly on Moxi. Go to Media Link on the Moxi menu, and Amahi shows up in the list of media servers, complete with a Penguin for the logo.

Working, no changes are needed, by default a server called Amahi appears in the list of the home menu.

The Roku Media Player (RMP) is a Roku Device app that can be installed easily via smartphone. There is no server side installation. The sole installation is of the app on the Roku device. Once installed, the RMP appears as just another "channel" on the Roku device, and, once invoked, the RMP makes all HDA shares visible. Any suitably formatted videos contained therein are playable via the Roku device. No real difficulty in getting all this to work quickly. (One proviso: I already had miniDLNA installed and I did not try confirm whether the RMP is somehow piggy backing off of the existing MiniDLNA setup (including the settings in the miniDLNA configuration file), or, whether the RMP's functioning is not dependent on the miniDLNA setup.)