Since the Amahi HDA appears as a NAS to you network, it is a natural destination for the backups from your network PCs. All backups are initiated by the client computer on to the HDA.

One of the ways to backup systems in your network is to use the operating-system provided backup service to backup to an Amahi share.

We have documented ways to conduct periodic backups in various platforms. If you have good suggestions on how to do that, please add them to this section of the wiki! (Or email it to us if you're wiki-shy)

There are a number of great open source or free backup programs out there that you can use free (commercial users should check license details). Here is a partial list (feel free to add others):

To backup Fedora clients, the following are recommended:

Mac OS X without Time Machine is not officially supported through automated HDA Backups at this time. You can, however, manually copy files to an HDA shared folder.

Another backup solution is a program called SuperDuper!, follow the link to see the steps and to find out about SuperDuper!.

Backups with SystemRescueCD have been reported that they work, more info can be found by visiting the link.

WARNING - Hack ahead! For Time Machine smb users only.

The method described below does not appear to work with Time Machine starting with Snow Leopard - it allows you to see the drives, but backups will not start successfully.

There is an unsupported way to enable using Mac OS X Time Machine to backup to your HDA. The Time Machine hack is a one liner command to be typed in a terminal in Mac OS X:

This will offer you the choice to backup to your HDA shares.

It should be noted that mounting a directory from your HDA via NFS let's you use time machine without this hack.

Needless to say, we're not advocating you backup your data like this, since Apple does not support this functionality. There are rumors that data corruption can occur if the size of the backup exceeds 2TB or if a large number of files, on the order of a million, are backed up. Because the exact conditions leading to data corruption are not well quantified, we do not recommend you backup like this.

For full time machine support in fedora, avahi(bonjour) and netatalk(afp) need to be installed 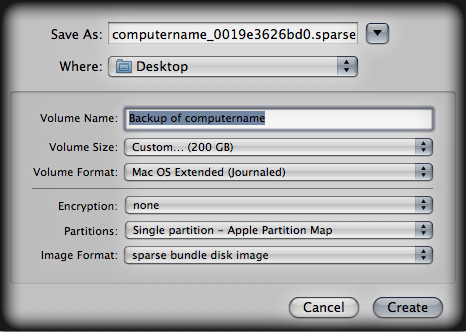 Update: Recent versions of timemachine do not appear to respect the max size of the sparsebundle and will cheerfully fill up your disk. To fix this, you need a more recent version of netatalk (2.0.5+?), which has an option to tell fibs about the size of the disk, hence limiting timemachine's space consumption. Fedora 14 has netatalk 2.1.4...

Bare metal backups are no longer available as a feature in current Amahi releases. Recommend checking out Clonezilla as a viable alternative. See the Amahi tutorial on using Clonezilla for detailed guidance.

NOTE: Older Amahi releases used the Personal Backup Appliance, or PBA, with the collaboration of the PBA leader, Roland Hui. PBA is an application to do hard disk clones, backups and restores but appears to no longer be under development.

Symantec's BESR allows full system backup and restore (virtual and physical)from any hardware with restore to dissimilar hardware. Conversion from P2V or V2P can also be scheduled. Install BESR on all windows computers connected to HDA and route backup to a folder on the HDA. Remember to set permissions on destination folders. Activate VSS copy so any open files are captured, optional threatcon can be used to trigger a backup if a threat becomes widespread. Alternatively BESR can be installed on a central Windows machine with agents deployed on all other Windows and Linux machines and using the new Linux media server agent (replaces RALUS) backup directly on the Linux HDA. This way you maintain a catalogue of all backups and can trigger them from a central console. BESR is the enterprise windows standard for Backup and restore. Norton the consumer brand of Symantec have "Save & Restore" I'm not overly familiar with this product but it replaces Norton "Ghost" in most markets. The GUI is exactly the same as BESR.

BESR is only for Windows machines connected to the HDA but is a great solution to protecting these machines and allows LIVE single pass backup and granular restore of files, saves doing an image and a file backup. Less space less time. An agent is available to backup Linux but another option is to boot the HDA on the recovery disk and create a cold image of the server.